It started with a performance of the play that shall not be named and ended with 90 children knew deep in Elizabethan clothing templates.

Our Year six students started by studying the great Scottish play as part of their literacy learning and then went on to do some character sketches in their art lesson- drawing out (literally) the character's different personalities. From here the children got really creative-- they examined Elizabethan clothing, patterns, prints and styles; they looked at the different depictions of Macbeth characters both in print and on stage. The children went on to combine all of this research to start designing their own Macbeth puppets.

﻿ The children used 'pop socks' stuffed with cotton-wool to make the body. The face was created by bunching and sewing the stuffing together. The body and head was then attached to a wooden cross.  Next, children created their own templates for their Elizabethan clothing and set to work cutting, sewing and assembling the outfits ready to dress their characters. Felt crowns, wooden swords and bead necklaces were all produced to embellish and add to the characterisation of each character.

What Next
﻿﻿
There were lots of possible ways we could have gone even further with this project: directing a puppet show reenactment, dressing a set, green screen animation and much more.

"E is for enthusiasm" said Mr Turnham with as much forced excitement as he could muster. The children were, in parts, happy to be discussing their school values and in parts confused and a little disappointed that the assembly wasn't linked to the advertised Engineering Day. Then suddenly the projector screen crackled with static and an alien face appeared on the screen, before a harsh, low voice interrupted the assembly, "Greetings tiny humans, I interrupt this BORING assembly to bring you bad news..."

This was the culmination of many weeks of work to provide Engineering Day with a powerful and engaging context. Since Monday our school twitter account had been buzzing with alien sightings and on Wednesday morning all the pupils and parents arrived to find a 4 metre wide flying saucer crashed in the playground. 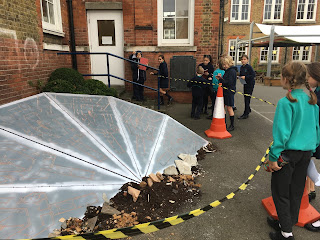 Our alien nemesis explained that she was planning to invade and that we were all in a spot of bother. At this point our assistant head ran through assembly shouting 'Code red! Code red!' At the same time staff phones began to go off and many left to take the worried calls of relatives, much to the delight of our pupils. Cue the men in black theme and an officious looking Mr Salomonson, complete with sunglasses and sidekick, who announced to a great cheer, "This is NOT a school; we are in fact a secret government research facility."

The children were sent to their engineering teams: all a mix of pupils from Y3 to Y6. We had taken two staff meetings and a support staff meeting to prepare for the day and all adults were clear on our educational model we were following for the day. Primarily this is the idea that we were setting up a context for children to direct their own learning. We would start with what the children wanted to do, find out what they already knew and facilitate, teach or direct them to achieve the next steps on their learning pathway. The day was about STEM, the process of engineering, coming together as a school community and teamwork skills. Thus, the more mixed ability we could make it, the better.

Each engineering team had a different task to work on.

Team 1: create an anti-alien suit of armour
Team 2: design an 'Andersen shelter' for the 21st century to protect against alien laser guns
Team 3: write the recipe for alien goo which would stick to a target and splatter as far as possible
Team 4: design escape pods using helium
Team 5: wire up the school with an electric warning system
Team 6: program robots to act as advance reconnaissance systems

Some teachers chose to work on their own projects, others joined up to share planning and resourcing.

In each class we arranged children into teams and gave them a role. I pinched this idea from the collaborative board game "Pandemic." If you like board games, I would recommend it. This not only helped focus children and facilitated group work, but helped teachers manage the class. Instead of stopping the whole class, an adult could instead call to the front all the children with a particular role to set mini challenges, ask questions or remind groups about aspects of the task. All these resources are available here.

The staff had a great day. The learning was great: we were particularly pleased by the understanding the children gained of what makes an engineer as our original brief was to put the 'E' in STEM for primary kids. Some of the children's independent use of iPads, using apps such as Book Creator, iMovie and Educreations was highly impressive - see the video below. One thing we hadn't planned for was the writing opportunities, but from newspaper articles about alien landings to instructions for how to build a shelter, the day was rich in writing opportunities. When combined with the research element in the design stage and the presentation of findings at the end of the day, the literacy element was very strong and we could have made more of this.

We instead asked teachers to concentrate on incorporating maths, design and technology skills and science knowledge into their plans. To prepare for the day we used two staff meetings. One where we effectively modelled the build session and a second to plan the day in detail. The resources can be found here.

Want to Get Involved?

So now we have a large spaceship in school which we can't really use much for the next four years until our current cohort has left. We also have all the resources referenced in links on this page and some experience of what worked well. Which leads us to our proposal: come and borrow our spaceship, run an engineering day in your school, take the project and run with it. We'd love to hear your ideas for enhancing this project. Give us a call and we'll arrange a deposit, but other than that it'll be free. Go on - you won't regret it!

Since we ran this project our STEM team has been engaged in a process of reflection. We have run pupil voice sessions and collected teacher feedback on Survey Monkey.  We are considering what our next steps should be and how we can make improvements for next year. Part of this process is reaching out to other schools to see how they might be able to develop our project. Another key element is asking teams to consider implementing contextualised project based learning as part of curriculum delivery. So for example, next term year 3 will be studying "Can we survive the Stone Age?" and linking PE, DT, Computing, Art, Literacy, Humanities and Science through a project which will culminate in time travelling back to the Stone Age. If we manage to survive, we'll keep you posted.